Despite the inclement weather and the noisy hotel a great time was had by all. Certainly the food at both the Hotel and the Golf Course was of a very high standard.

26 members and 4 visitors travelled. 3 from sunny France! 14 played an additional days golf on the new course on Fri in advance of the weekend. This was won by Declan McGrady (42pts!!) with Brendan Mason (36pts) second. It turned out to be the best weather of the weekend,

Sat saw the 30 playing the new course teeing off at 11am in threatening weather conditions. Little did we know what was in store but by the time the first group had reached the 14th and the last at the 9th the heavens opened and the course ranger arrived to say that the course had been closed. After a long discussion in the evening it was decided to scrap that days competition.

Sun saw us arriving at 9:15 to play the old course only to find that while it was open buggies were banned! Evenually we got one buggy for 2 of our Frnch visitors. Unlike Sat we managed to get most people to complete their round despite a heavy shower around the 8th and 9th and the weather turned to a thunderstorm with hailstones for the last few groups on the course from the 16th!!

The Sunday winner came from one of those groups with Vice Captain Harry McGrath (34pts) winning on a better back 9 from Tony Fearon. These two were closely followed by  Declan McGrady (33pts) on a better back 3 from the Captain Donal Campbell.

The visiitors prize was won with a magnificent score of 40pts by John McGrath with another great score from Alex Dubourg (one of the French contingent!) of 36pts.

With the cancellation of the Sat competition the prize funds for that day were donated to this years Charity.

Below is the winner Harry McGrath, Vice Captain, receiving his winnings from the Captain Donal Campbell. 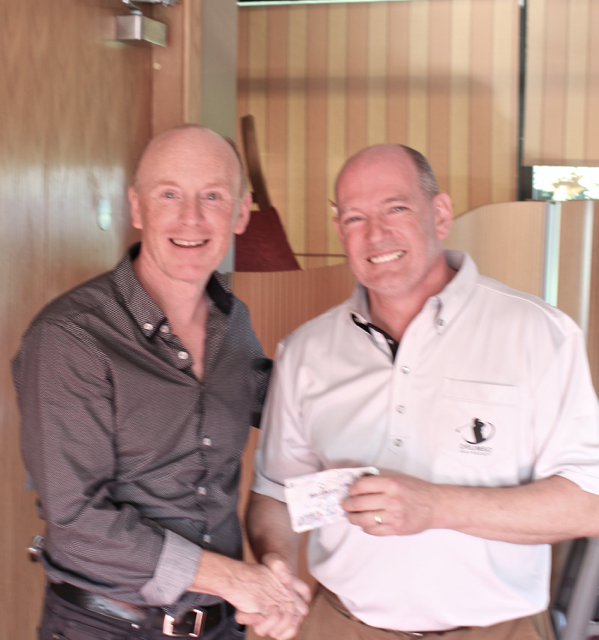